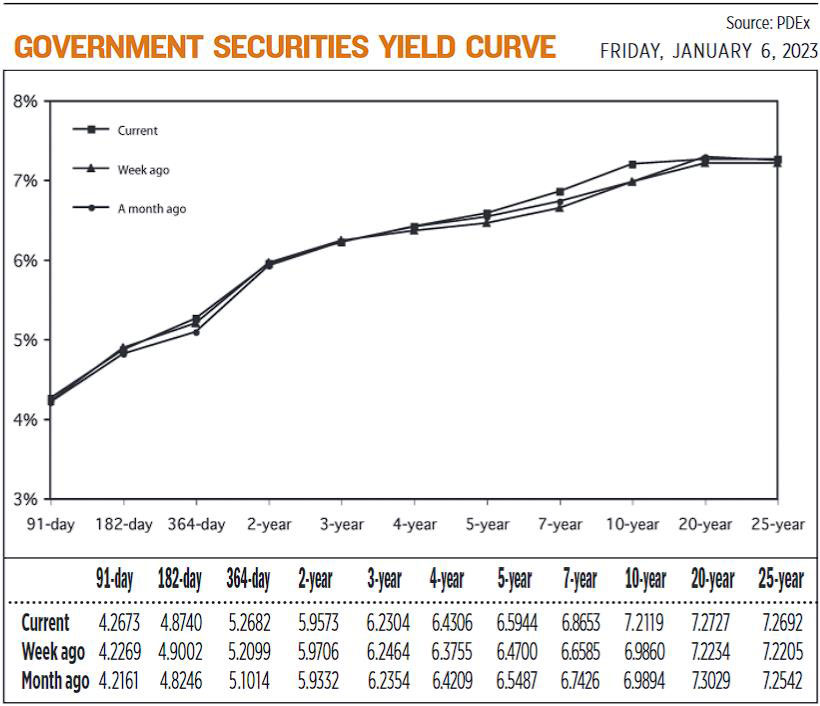 GS yields, which move opposite to prices, went up by an average of 6.85 basis points (bps) at the secondary market week on week, according to the PHP Bloomberg Valuation Service Reference Rates as of Jan. 6 published on the Philippine Dealing System’s website.

Inflation picked up to a fresh 14-year high last month, as prices of food, particularly vegetables, surged during the holiday season, the Philippine Statistics Authority (PSA) said on Thursday.

Inflation was below the 8.3% median estimate in a BusinessWorld poll of 11 analysts and within the 7.8-8.6% estimate given by the Bangko Sentral ng Pilipinas (BSP).

Meanwhile, the latest US jobs report showed wage growth slowed in December, fueling investor bets that inflation is easing and that the Federal Reserve need not be as aggressive as some feared, Reuters reported.

Friday’s data showed the US economy added jobs at a solid clip in December, pushing the unemployment rate back to a pre-pandemic low of 3.5% as the labor market stayed tight, while average hourly earnings rose 4.6% in December from a year earlier, down from 4.8% in November.

Even though the data showed a still-robust labor market, investors read it as a sign that the US economy might be poised for a “soft landing” amid rising rates. A cooldown in wage inflation, an indicator the Fed also monitors when addressing price pressures, added to the optimism.

In another set of data, US services activity declined for the first time in more than 2-1/2 years in December as demand weakened, with more signs of inflation easing.

With the start of the new year, the bond trader said rates may continue to go up amid expectations of more monetary tightening by the BSP and the Fed.

“Near term, upward pressure on yields shall persist given that BSP and Fed hikes are not yet done until probably the first half of the year,” the bond trader said.