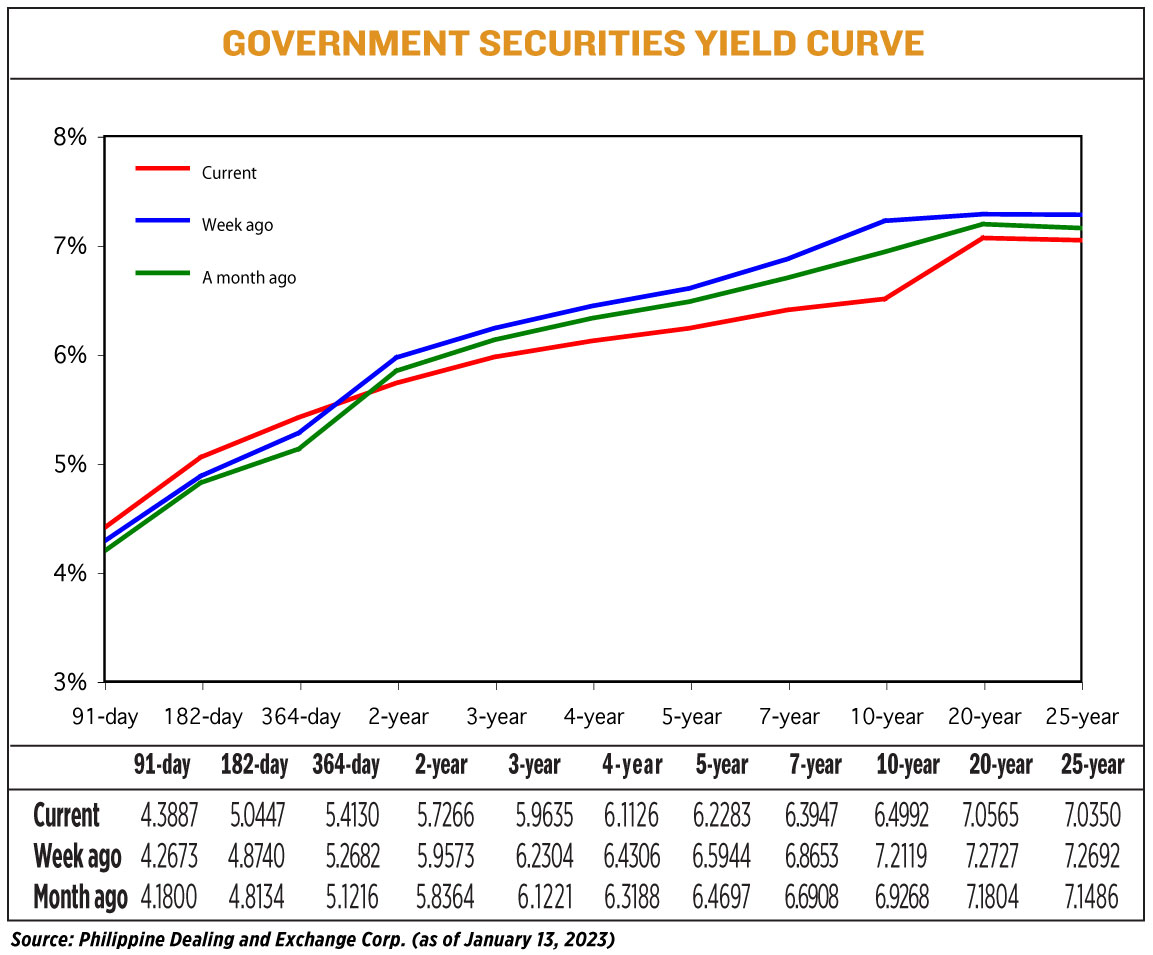 Bond yields, which move opposite to prices, fell by 21.62 basis points (bps) on average week on week, based on PHP Bloomberg Valuation Service Reference Rates as of Jan. 13, published on the Philippine Dealing System’s website.

Last week’s trading session saw yields on Treasury bills (T-bills) increase, but those on Treasury bonds (T-bonds) decreased across the board, offsetting the rise in rates of shorter tenors.

“[Last] week was characterized by risk-on positioning based on a view that central banks will pause from their hawkishness as a result of tempering of inflation,” Noel S. Reyes, Security Bank Corp. Chief Investment Officer for Trust and Asset Management Group said in an e-mail.

Mr. Reyes added that slower December US consumer inflation contributed to this sentiment.

A bond trader said GS yields declined amid growing views of a smaller US Federal Reserve policy rate hike in their Jan. 31 to Feb. 1 meeting.

“Participants rather reacted quite earlier than the official release of the US inflation report amid prevailing views of declining inflation this year,” the bond trader added.

US consumer prices fell for the first time in more than two years in December, bolstering hopes that sustained easing inflation could give the Fed room to consider smaller interest rate hikes.

In the 12 months through December, the CPI increased 6.5%, the smallest rise since October 2021 but well above the Fed’s 2% target. This followed the 7.1% posted in November.

Meanwhile, Mr. Medalla last week said they will likely continue to hike benchmark rates amid persistent inflation risks, but these increases could be smaller than previous moves.

The Monetary Board last year raised borrowing costs by a total of 350 bps, bringing the policy rate to a 14-year high of 5.5%.

For this week, the bond trader said yields might move lower on expectations of weaker US producer inflation and retail sales reports for December 2022.

“Likewise, concerns of a possible global recession might be bolstered owing from potentially slower Chinese economic growth for the fourth quarter of 2022,” the bond trader added.

For Mr. Reyes, there could be some profit taking in the market after the sudden drop in yields and amid expectations of a retail Treasury bond issuance.

“However, sell-offs should be met by buyers and they will be buying for the same reasons attainment of peak inflation on central banks’ imminent pause. [The] scheduled 20-year auction should see decent buying interest,” Mr. Reyes added.

On Tuesday, the government will offer P35 billion in reissued 20-year T-bonds with a remaining life of 19 years and 10 months. — A.M.P. Yraola