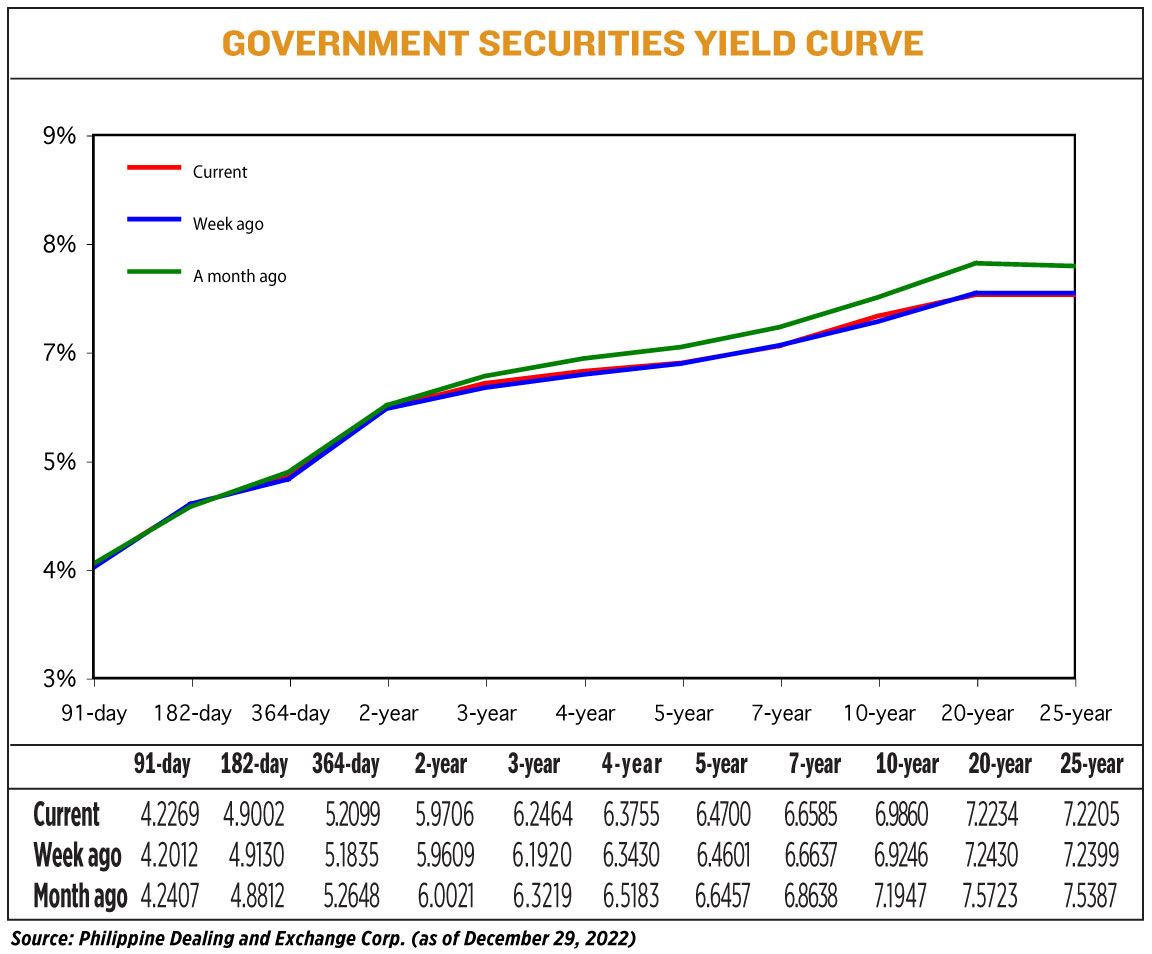 YIELDS on government securities (GS) were mixed last week amid a lack of catalysts and as investors took positions ahead of the new year.

GS yields at the secondary market went up by an average of 1.48 basis points (bps) week on week, based on the PHP Bloomberg Valuation (BVAL) Service Reference Rates as of Dec. 29 published on the Philippine Dealing System’s website.

Financial markets were closed on Dec. 30 in observance of Rizal Day.

“The main driver for the movement (or lack thereof) [last] week was the shortened three-day work week. Given this, market activity was fairly limited, with most investors already having repositioned previously and winding down towards the holidays. Given the focus on the long-end of the yield curve, we saw bids get more defensive,” ATRAM Trust Corp. Head of Fixed Income Jose Miguel B. Liboro said in an e-mail.

“Not a lot of actual selling activity given the reduced market liquidity, but we expect market bids to remain defensive in January, especially with expectations for December CPI (consumer price index) to remain above the 8% handle over the short term,” Mr. Liboro said.

The BSP’s month-ahead forecast range indicates that inflation may have been faster than the 14-year high of 8% in November.

The upper end of the forecast or the 8.6% would also be the fastest pace since the 9.1% print during the Global Financial Crisis in November 2008.

If the 8.6% forecast is realized, this would bring the full-year average inflation to 5.9%, slightly above the BSP’s 5.8% average forecast for 2022.

December would also be the ninth straight month that inflation surpassed the BSP’s 2-4% target range.

“Rates moved up across the yield curve by 250-300 basis points from a year-on-year standpoint. Similar to other markets both locally and globally, Philippine fixed income had a challenging 2022. However, this has put it in a decent position for much brighter prospects for 2023, given where yield levels currently are,” he said.

“We are likely to see a defensive bias initially in January as the combination of likely still-above 8% CPI, long-end auction focus, a resumption of the trend upwards in global yields and a large potential supply injection in the form of a jumbo RTB (retail Treasury bond) to weigh on the market. Despite these short-term headwinds, we expect Philippine fixed income to deliver a stronger performance in 2023 given the current starting levels.

The government plans to borrow PHP 200 billion from the domestic market in January, higher than the PHP 135-billion program in December. It will raise PHP 60 billion via T-bills and PHP 140 billion from T-bonds. — A.O.A. Tirona