Philippines’ top 1000 corporations bounced back in 2021 THE PHILIPPINES’ top 1,000 corporations bounced back in 2021, with their combined gross revenues hitting PHP 13.44 trillion as the economy slowly recovered from the coronavirus pandemic.

According to the BusinessWorld Top 1000 Corporations in the Philippines report, the aggregate gross revenue of the top companies jumped 17.5% in 2021, from the PHP 11.44 trillion posted during the height of the pandemic in 2020. This was the fastest gross revenue growth since the 24.4% expansion recorded in 2001. 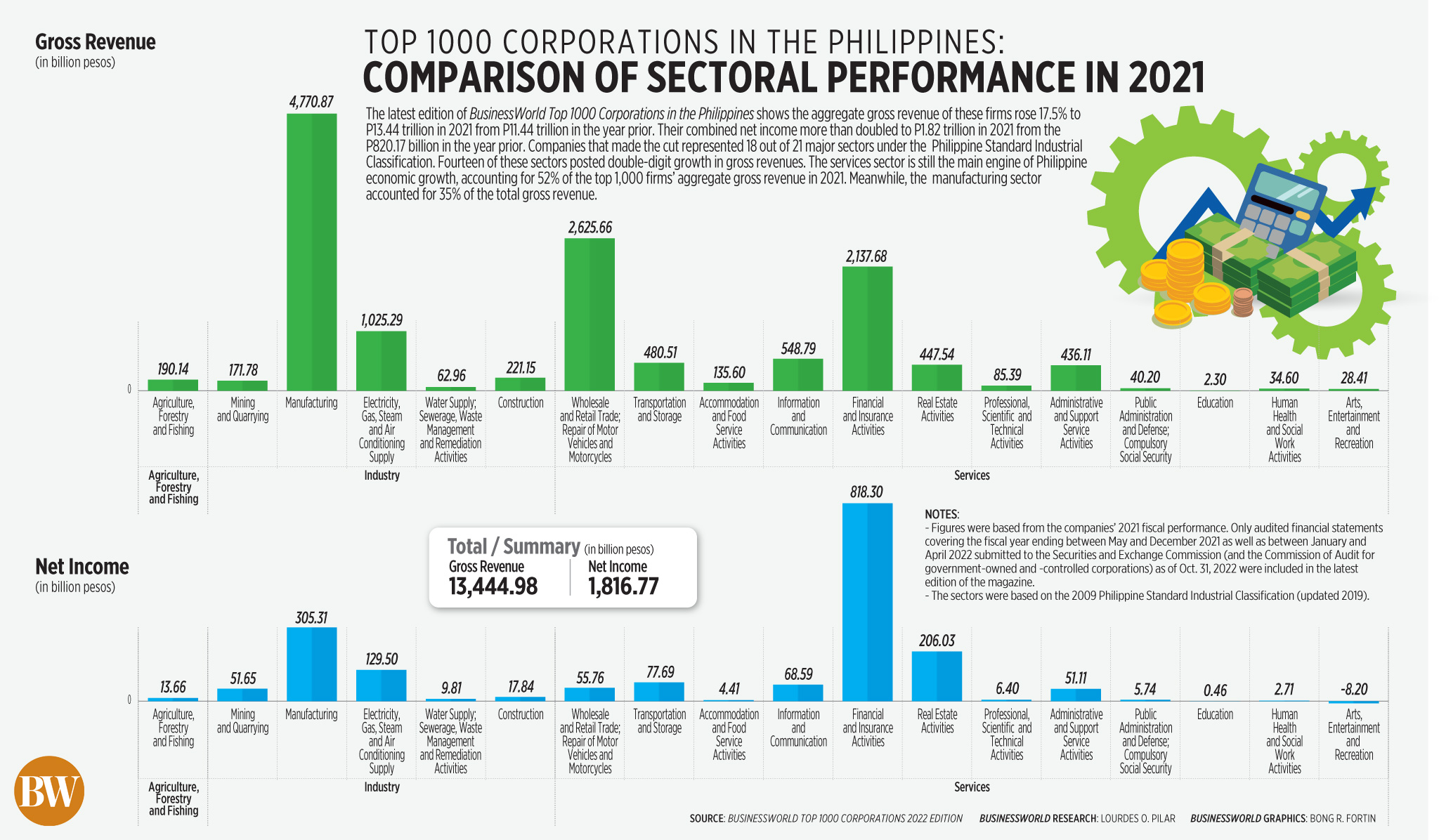 The financial performance of the country’s biggest corporations reflected the recovery of the Philippine economy, as it reopened after the strict lockdowns implemented in 2020.

The latest edition of the Top 1000 had a gross revenue cutoff of P2.254 billion, higher than the previous edition’s PHP 1.563 billion.

Among the Top 1000 companies, 793 saw their gross revenue increase in 2021 compared with 343 companies in the previous year.

More than half or 560 companies posted net income growth in 2021, while 224 saw their profit decline.

Another 102 firms posted a profit in 2021 after recording a net loss in the previous year, while 36 swung to a net loss. Seventy-eight firms remained in the red.

Firms included in the Top 1000 list represented 18 out of the 21 major sectors under the Philippine Standard Industrial Classification.

The manufacturing sector accounted for 35.5% of the total gross revenue in 2021 and had the most number of companies included in the list with 307.

The services sector continued to be the main engine of Philippine economic growth, accounting for 52% of the aggregate gross revenue in 2021.

Exporting firms recorded PHP 2.577 trillion in revenues, 19.7% higher than the previous year, and made up 27.7% of the list’s total gross revenues.

The latest edition included 203 corporations, of which 47 are first-time entrants.

For the second straight year, Manila Electric Co. (Meralco) remained the Philippines’ top corporation by gross revenue. The power distributor posted P292.09 billion in gross revenue in 2021, up 9.8% from 2020. Meralco also topped the list in terms of net sales with P286.71 billion, and ranked 18th in terms of net income with P21.30 billion.

The Top 1000 publication also provides a separate table ranking of these companies on a consolidated basis. This is different from the main top 1,000 list where the parent-only financial statements are used to account only for parent firms’ equitized earnings of their subsidiaries and associates.

Petron and subsidiaries claimed the third spot with PHP 440.66 billion, a 51.8% increase year on year.