Inflation accelerates to 8.1% in December INFLATION ACCELERATED to a fresh 14-year high in December, as prices of food, particularly vegetables, surged during the holiday season, the Philippine Statistics Authority (PSA) said on Thursday.

Inflation was below the 8.3% median estimate in a BusinessWorld poll of 11 analysts conducted last week and within the 7.8-8.6% estimate given by the Bangko Sentral ng Pilipinas (BSP). 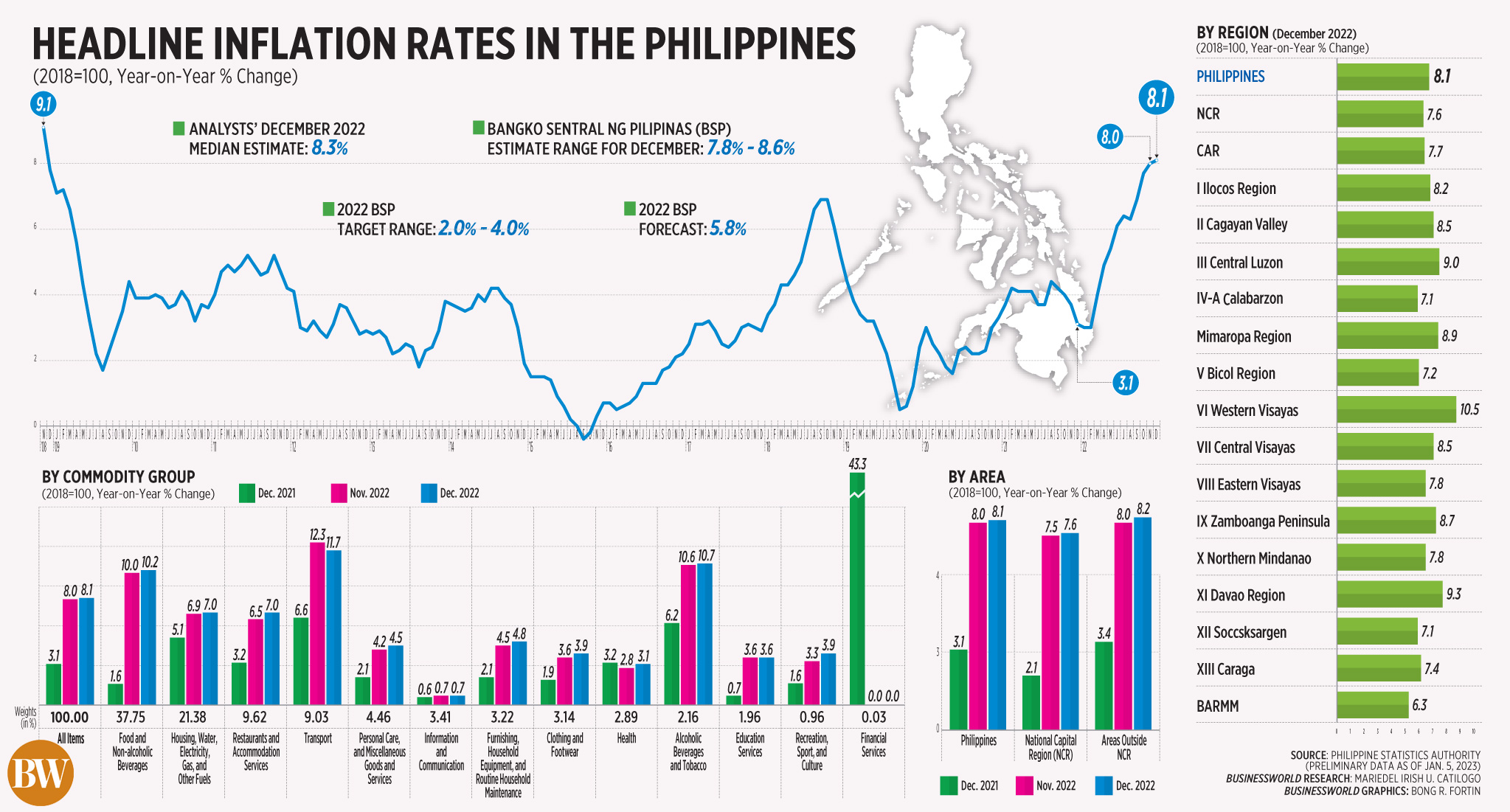 December also marked the ninth month in a row that inflation breached the BSP’s 2-4% target range.

“This is consistent with the assessment of elevated inflation could peak in December 2022 before decelerating in the succeeding months due to easing global oil and non-oil prices, negative base effects, and as the impact of BSP’s cumulative policy rate adjustments work its way to the economy,” the central bank said in a statement.

Meanwhile, December core inflation, which discounted volatile prices of food and fuel, picked up to 6.9% from 6.5% in November. This was the fastest pace since the 7.2% print in November 2008.

At a press briefing, National Statistician Claire Dennis S. Mapa noted a slowdown in inflation on a monthly basis. Month on month, the consumer price index (CPI) inched up by 0.3%. Stripping out the seasonality effects on prices, inflation slipped to 0.3% in December from November’s 0.7%.

“We are really seeing a slowdown in terms of incremental increases both in the raw form and the seasonal adjusted form… That seems to be good news. However, there are still threats like the price of vegetables that contributed really substantially in the inflation, as well as other food items,” Mr. Mapa said.

December inflation was driven by the 10.2% year on year growth in the food and non-alcoholic beverages index, faster than the 10% seen in November.

Food inflation quickened to 10.6% in December, from 10.3% in November and 1.6% a year ago, as vegetable prices skyrocketed amid supply shortages due to typhoon damage.

In a statement, the National Economic and Development Authority (NEDA) said the higher prices of vegetables was due to crop damage from weather disturbances in the past months, disrupting the farmers’ planting calendar.

Also, December inflation was driven higher by the restaurants and accommodation services index, which climbed to 7% in December (from 6.5% in November), reflecting continued “revenge spending” by Filipinos during the holiday season.

Another driver was the housing, water, electricity, gas and other fuels index, which rose to 7% in December from 6.9% in November.

“The government will continue to prioritize addressing the impact of inflation as it remains to be a challenge not only in the country, but throughout the globe,” NEDA Secretary Arsenio M. Balisacan said.

Meanwhile, a slower rate of increase was seen in transport (11.7% from 12.3% in November), while the annual inflation rate for education services (3.6%) and financial services (0%) were unchanged. 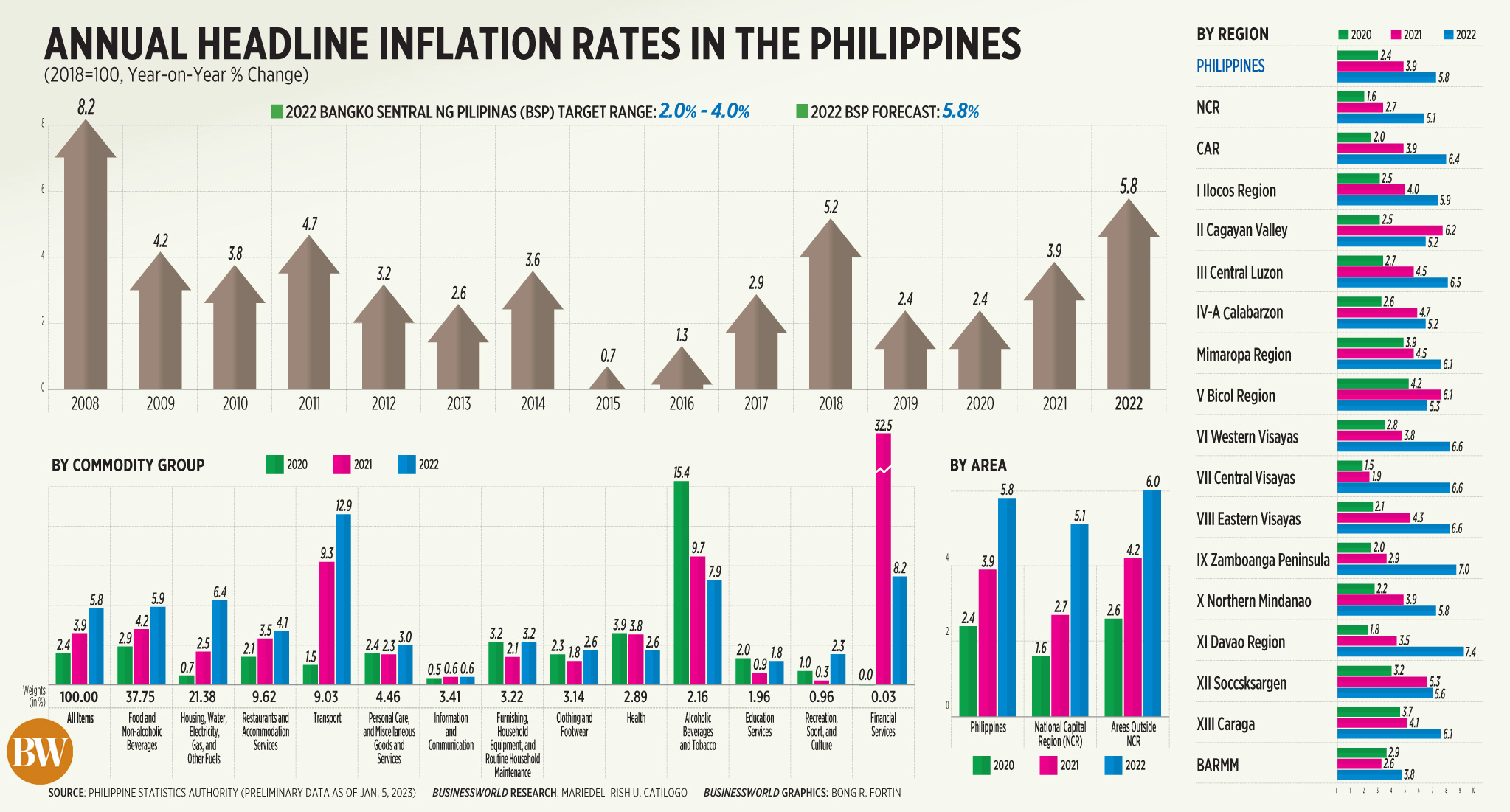 Year to date, the average inflation for this income group stood at 5.3%.

PSA’s Mr. Mapa also announced the rebasing of its CPI for the bottom 30% income households to a 2018 base from 2012, starting next month for the reporting of January inflation.

Inflation in the National Capital Region (NCR) rose to 7.6% in December, faster than the 7.5% print in November and 2.1% a year ago.

PSA’s Mr. Mapa said the December inflation print “could be a peak,” but there is a risk that prices may still surge in January.

Bank of the Philippine Islands Lead Economist Emilio S. Neri, Jr. said that with the transport index slowing down, inflation may have reached its peak in 2022.

“Upcoming prints will likely reflect more the recent stabilization of oil prices. However, we still expect a gradual decline in inflation considering the supply and production issues in the agriculture sector,” he said.

Mr. Neri noted volatility in food prices will continue to be a recurring problem if the structural problems in the agriculture sector are not addressed.

In a note on Thursday, ING Bank N.V. Manila Senior Economist Nicholas Antonio T. Mapa said December may have been the peak for this inflation episode.

“Storm damage to crops may have helped fan price pressures for basic food items but elevated transport and utility costs for nearly a year may have also contributed to price pressures spreading across the CPI basket,” Mr. Mapa said.

“Meanwhile, resurgent demand reflected in the stronger-than-expected GDP growth, fanned inflation even further with notable increases in inflation for the services sector. All of these suggest that despite inflation peaking late last year, we could see inflation face only a slow grind lower in 2023,” he added.

“Rising core inflation indicates that price increases were more widespread and are not just limited to certain sectors or goods, as businesses may have taken advantage of strong demand during the peak holiday season,” Mr. Roces said.

He added that inflation may average 4.5% this year, still above the central bank’s 2-4% target.

The BSP said that the risks to the inflation outlook are “tilted to the upside” for this year, citing volatility in food prices due to weather disturbances, transport fare hike petitions, and potential wage adjustments.

Risks to the inflation outlook remains “broadly balanced” in 2024.

“Meanwhile, the impact of a weaker-than-expected global economic recovery continues to be the primary downside risk to the outlook,” the BSP added.

Meanwhile, the still-elevated inflation in December bolstered economists’ expectations that the BSP still has room to raise rates this year.

“There will be a post-holiday consumption slowdown, and favorable base effects from the high inflation levels since March 2022 are expected to set in and the rate will fall within the 2%-4% inflation target by the middle of the year,” Mr. Roces said.

“This gives the central bank some wiggle room to diminish the size of hikes so as not to slow down domestic growth too much while still driving home the inflation fight,” he said.

“With this, the current headline and core inflation print suggests that the BSP can opt for a 25-bp hike in its next policy meeting in Feb. 16, following an expected similar-sized hike by the US Federal Reserve Bank,” Mr. Roces added.

“We could see BSP roll out additional rate hikes to match moves by the Fed. However, once the Fed carries out its much-anticipated ‘pivot’ we believe Governor Medalla could consider a pause of his own as policy rates are currently already in restrictive territory,” he said.

“If a recession in the US happens, the FOMC might decide to take back some of their hikes and bring down the Fed funds rate closer to 3%. In this scenario, the BSP policy rate might peak at around 6.5% in 2023,” Mr. Neri said.

“The BSP will likely deliver their own cuts following the Fed, but still maintaining the 100 to 200 bps differential with US rates. The BSP policy rate could go down to 4.75% in the latter part of 2023 if this happens,” he added.

The Monetary Board’s next policy-setting meeting is on Feb. 16. – Keisha B. Ta-asan, Reporter