However, the amount of money sent by OFWs to the Philippines in November was the lowest in six months or since the USD 2.43 billion in May 2022. It also declined by 9.2% from the $2.911 billion in October. 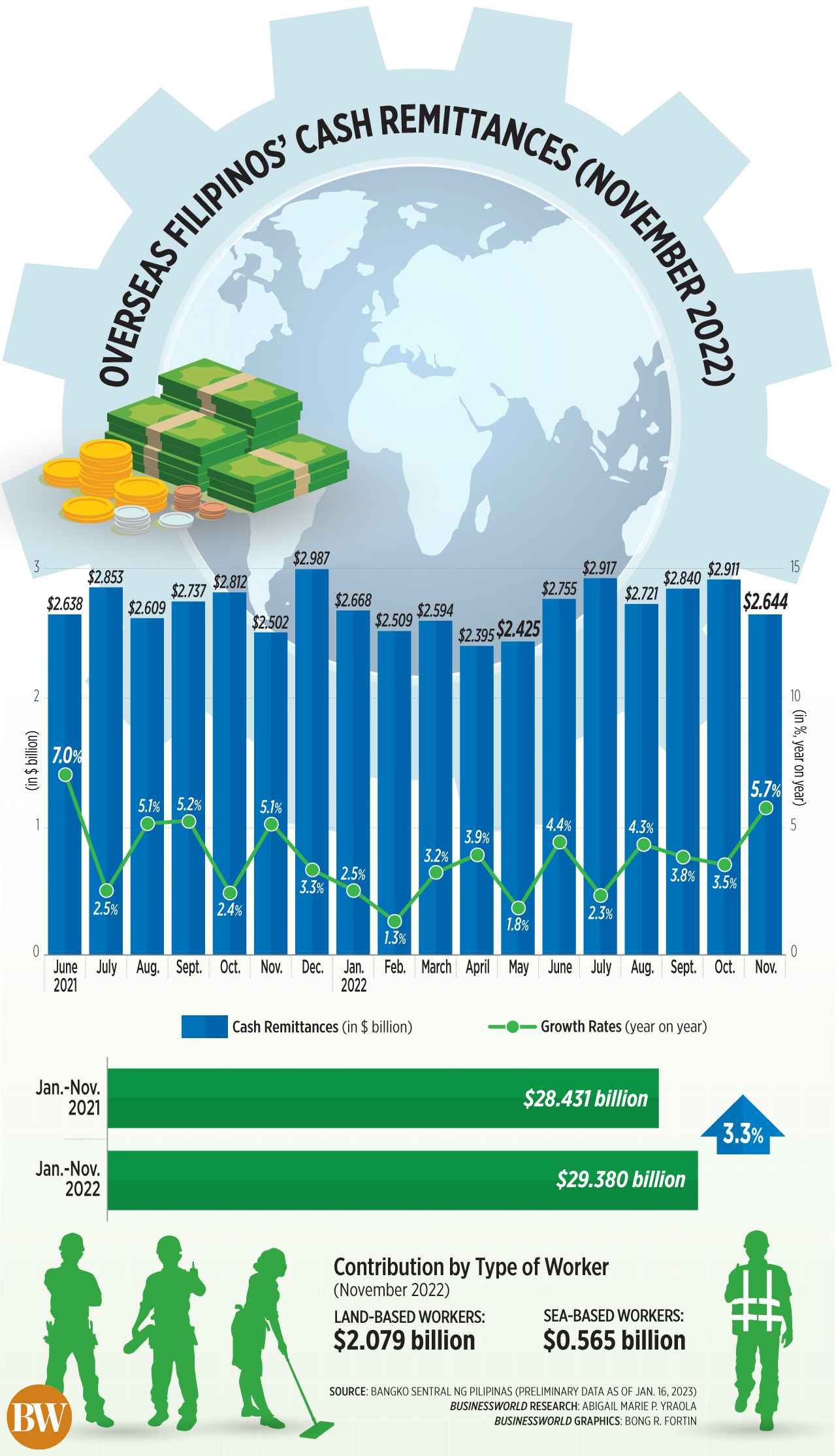 For the January-to-November period, cash remittances coursed through banks rose 3.3% to $29.38 billion, from USD 28.43 billion a year earlier. This was below the BSP’s 4% remittance growth target for 2022.

In a statement, the BSP attributed the growth in cash remittances in November to higher receipts from land- and sea-based workers.

Cash remittances from land-based OFWs jumped by an annual 5.6% to USD 2.08 billion in November, while inflows from sea-based workers increased by 5.9% to USD 564.972 million.

OFWs may have sent more money to their families as inflation continued to accelerate, analysts said.

Headline inflation quickened to a 14-year high of 8% in November from 7.7% in October and 3.7% in November 2021, breaching the BSP’s 2-4% target range for an eighth straight month.

“As expected, November OFW remittances growth has risen further from a year ago as OFWs sent more money for the holiday celebrations,” UnionBank of the Philippines, Inc. Chief Economist Ruben Carlo O. Asuncion said in a Viber message.

Rizal Commercial Banking Corp. Chief Economist Michael L. Ricafort said cash remittances may have slumped to a six-month low due to the peso’s depreciation against the US dollar.

“The slowdown in OFW remittances amount to 6-month lows may have to do with the relatively higher US dollar/peso exchange rate compared to early 2022… that partly led to a lower amount of US dollars sent by OFWs to the country, given the higher equivalent of these remittances when converted to pesos,” he said in an e-mail note.

In the 11 months to November, the BSP said there were higher inflows from the United States, Saudi Arabia, and Singapore.

Remittances from the top 10 countries cumulatively made up 79.7% of the total during the 11-month period.

Meanwhile, personal remittances, which include inflows in kind, grew by 5.8% to $2.93 billion in November from USD 2.77 billion a year ago.

“Improving sentiments in sending countries, such as the US and Asia, will help support growth,” she said in a Viber message.

All public and private schools should have transitioned to five days of face-to-face classes starting November, the Department of Education earlier said.

“For example, overseas Filipinos likely sent more money to help alleviate inflationary pressures. In December also, we saw an increase in overseas Filipino arrivals which can prompt higher spending in anticipation of the holidays,” she added.

“With inflation topping out at 8.1% we could see Filipinos based abroad send more cash to help beneficiaries cover expenses for the holidays,” Mr. Mapa likewise said.

The BSP expects cash remittances to grow by 4% again this year. – Keisha B. Ta-asan, Reporter