THE PHILIPPINES posted a USD 612-million balance of payment (BoP) surplus in December, bringing the full-year level to a record deficit of USD 7.3 billion.

The full-year gap was a reversal of the USD 1.3-billion surplus in 2021, the Bangko Sentral ng Pilipinas said in a statement on Thursday.

“This cumulative BoP deficit was due to the widening trade in goods deficit as goods imports continued to surpass goods exports on the back of the increase in international commodity prices and resumption in domestic economic activities,” it said. 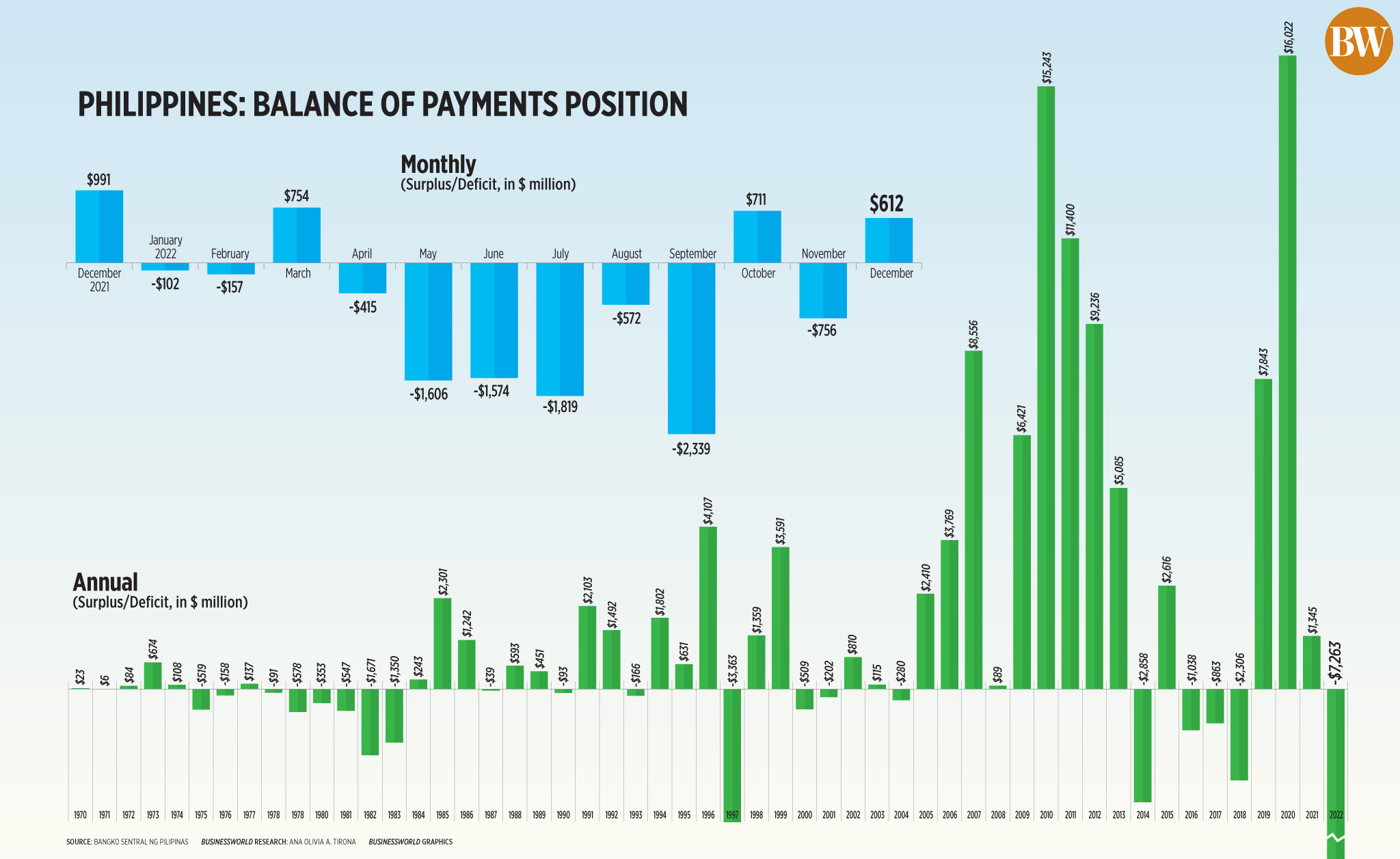 The BoP gives a glimpse into the country’s transactions with the rest of the world. A deficit means more funds left the country, while a surplus shows that more money came in.

Gross international reserves rose to USD 96.1 billion at the end of December from USD 95.1 billion a month earlier.

The end-2022 reserves represented “a more than adequate external liquidity buffer” equivalent to 7.3 months’ worth of imports and payments of services and primary income,” the BSP said. The level was 5.9 times the country’s short-term external debt based on original maturity and 3.9 times based on residual maturity.

The central bank attributed the BoP surplus in December, which was lower than the USD 991-million surplus a year earlier and a turnaround from the USD 756-million gap a month earlier, to inflows from its net foreign exchange operations and net income from its investments overseas.

Merchandise imports slid by 1.9% to USD 10.78 billion in November from a year earlier, while exports jumped by 13.2% to USD 7.10 billion, according to data from the local statistics agency.

This brought the trade-in-goods deficit — the difference between exports and imports — to USD 3.68 billion, narrower than the USD 4.71-billion shortfall in November 2021.

The 2022 BoP deficit was better than the USD 11.2-billion deficit estimated by the Philippine central bank.

Based on International Merchandise Trade Statistics (IMTS), the trade deficit for January-November 2022 reached USD 53.7 billion, up 44.7% from the USD 37.1-billion deficit posted in the same period last year.

“Aside from inflows from BSP’s operations, the country’s BoP surplus in December was likely helped by a narrower trade deficit as import prices continue to soften,” Domini S. Velasquez, chief economist at China Banking Corp. said in a Viber message.

“Moreover, the pickup in remittances in November and possibly in December added to the inflows,” she said. “The 2022 deficit was much lower than BSP’s latest projection of USD 11.2 billion, providing some support to the peso by yearend.”

November cash remittances grew by 5.7% to USD 2.644 billion, the lowest in six months, according to central bank data.

“In 2023, we expect the BoP deficit to continue narrowing due to a lower import bill in terms of prices and demand as economic growth moderates, Ms. Velasquez said. “Moreover, there is some upside opportunity for exports due to China’s reopening.”

The BSP expects a balance of payment deficit of USD 5.4 billion this year. – Keisha B. Ta-asan, Reporter